Based in Cambridge, Massachusetts, Dave Neiman has been performing and teaching hammered dulcimer since the early 1980’s. His passion for dulcimer has taken him to music festivals, concert stages, and street performing venues in many parts of the U.S. as well as Canada, Europe, and twice-yearly tours of Japan throughout the 1990’s. He has taught dulcimer privately and in groups in workshops and festivals since 1982. In 1987 Dave won first place in the National Hammered Dulcimer Championship at the Walnut Valley Festival in Winfield, Kansas.

Dave started out playing traditional New England dance tunes on dulcimer but, influenced by his classical and jazz guitar studies, established a reputation for his arrangements of classical and popular pieces. Dave has four recording: Spectrum, an assortment of folk melodies from various cultures; Early Works, a collection of Baroque and Renaissance composition; The Door to Christmas, with Steve Schneider, carols from various countries; and Balance on Air, with Beverly Woods, a variety of English and Irish tunes. 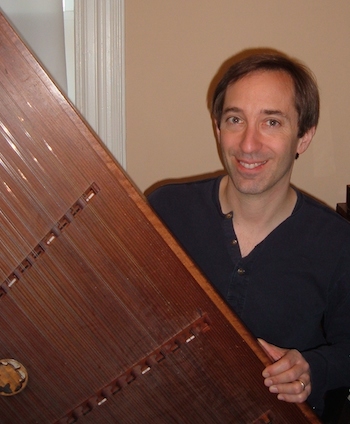